If you want to know something about Berkeley Psychic Institute (BPI), you can read reviews from BBB, Ripoff Report, Yelp, or some fora, etc.

According to Wikipedia, “the Berkeley Psychic Institute (BPI) is a school for spiritual development, founded in 1973 by Lewis S. Bostwick in Berkeley, California and is also the workshop of the seminary of the Church of the Divine Man. After Lewis’ death in 1995, his wife, Vr. Rt. Rev Dr. Susan Hull Bostwick, assumed leadership of the institute and the church. The institute has taught thousands of people to read auras and study channeling, one of the most popular classes being The Clairvoyant Training Program. The institute has contributed progressive ideas to the interfaith movement and has also contributed to a growth in number of enlightenment schools and metaphysical institutions.”

On their official website of Berkeley Psychic Institute, it says “for the last 40 years, over 300,000 people have learned simple and powerful tools taught in BPI’s psychic kindergarten. ”

We didn’t find any complaints in BBB or Ripoff Report. Of course, they are not a BBB accredited business, and there is no rating for them so far. 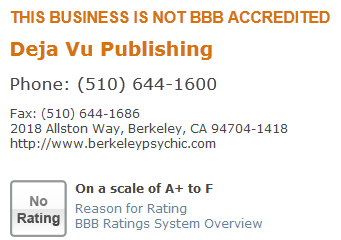 We found some information about Bingo Marasigan, Director of BPI Berkeley on their website. It says “before she stepped in as director of BPI, she had her own practice doing intuitive healing, bodywork and health coaching. In the summer of 2011, she orchestrated getting the Berkeley Psychic Institute featured in ABC Nightline News which was also re-aired in the Oprah Network in spring of 2012. ”

Some Real Estate Agents Call in Psychics To Do ‘House Healings’

Places, such as a house or an apartment, also can have auras from the psychic energy people have left behind. A group of psychic healers from the institute now work in real estate conducting “house healing,” at the request of a real estate agent. They clear the rooms of any negative energy left over from the previous owners.

Real estate agent Luis Castillio-Munoz says he uses the healers purely to help houses sell. He had them come to one house where the former tenants were out of work and couldn’t afford to pay the rent for six months.

“It’s my business, so if I want to sell a house, you put energy in, energy comes out,” he explained. “We’ll do whatever it takes to get it sold.”

However, the house in question still hasn’t sold.

About this issue, you can read a blog called “The Church of Divine Man and Berkeley Psychic Institute; Church or Cult?” at http://berkeleypsychiccult.blogspot.com/. It declare that:

A critical examination of the organization known as the Berkeley Psychic Institute. The Berkeley Psychic Institute is the Seminary of the Church of Divine Man, founded by Lewis S Bostwick in 1973. Critical evaluations of the teachings, leadership, practices and graduates. It is also a personal journey out of the world of a psychic/new age cult and cults in general which have monpolized nearly 30 years of my life. This is a private forum and all comments are moderated.

If you know this place or had experiences with them, please share with us in the commenting below.